Intelligent. Docile. Hardworking. Passive. Diligent. All words used to describe America’s “model minority.” The oxymoronic status of Asian Americans’ role within the American hierarchy has continuously enforced systemic racism against other minoritized communities. However, it has also been used to oppress Asian Americans through the erasure of their narratives and hardships.

This past year, we have witnessed firsthand the invisibility of the Asian American narrative. From March 19, 2020 to February 28, 2021, StopAAPIHate reported a total of 3,795 hate crimes – a drastic increase from previous years. While we cannot prescribe the specific cause of this spike, hate speech such as the “Chinese virus” and “Kung-flu” used by our former president can only be presumed as the primary contestant. Additionally, throughout the entire year, severe hate crime incidents rarely made a presence on mainstream media outlets despite Asian organizations fighting for representation and support. Instead, one year later, it took 8 victims on March 16, 2021 in Atlanta, Georgia for us to get the recognition we needed.

Among the flood of posts and support on Instagram that following week, one stuck out to me the most – a quote by Steven Yeun said, “Sometimes I wonder if the Asian American experience is what it’s like when you’re thinking about everyone else, but no one is thinking about you.” And I began to reflect: We KNEW Asian hate crimes were rising. We KNEW the words used to instill blame on East and Southeast Asians. We KNEW it would only get worse. Why are we JUST NOW receiving recognition on social media? Why are people JUST NOW posting in solidarity with the Asian community? Why did it take EIGHT lives for change to occur? And for the love of God, why are they not calling this as it is – A HATE CRIME?

My algorithm on social media does a splendid job sheltering me from the haters. I’m surrounded by GoFundMe accounts for the victims’ families, ways to support the AAPI community, educational events to attend, and more. But my algorithm didn’t shield me from the hate lingering outside of my bubble. I read comments about Asian wealth and fortune. I watched videos of anti-Blackness’ prominence within the Asian community. I heard rumors about the victims’ side job as sex workers. All of these were used as justification for the horrific acts of hate this past year. But these are all just stereotypes – false generalizations of the greater community. What do people actually know about the Asian American narrative? Do people believe our tangential whiteness automatically grants us liberty, rights, and wealth?

My dad is the fourth of six children. He had a difficult upbringing in Vietnam – so difficult that he decided he would never set foot in the country again. When his oldest brother was about to turn 18, his parents decided it was time for the four oldest children to flee along with a couple of his cousins and his aunt in fear their sons would be enlisted into the army when they came of age.

The first attempt was unsuccessful. They were caught by soldiers and, luckily, spent one night in jail. My dad recalled a scare tactic the soldiers would use where they pulled a gun next to his ear and fired to temporarily deafen him – of course. This was in addition to repeatedly punching and kicking him in the stomach.

The second attempt was successful, if success means making it out of the country; however, stories are told of “successes” ending in abandoned ships, pirates, and cannibalism. His boat made it all the way to a refugee camp in Indonesia, but the journey was not without crowded spaces, vomit-filled water barrels, and starvation. He, his three siblings, his two cousins, and his aunt stayed at the camp for about a year, until they were chosen by a foster family from Salem, Virginia. 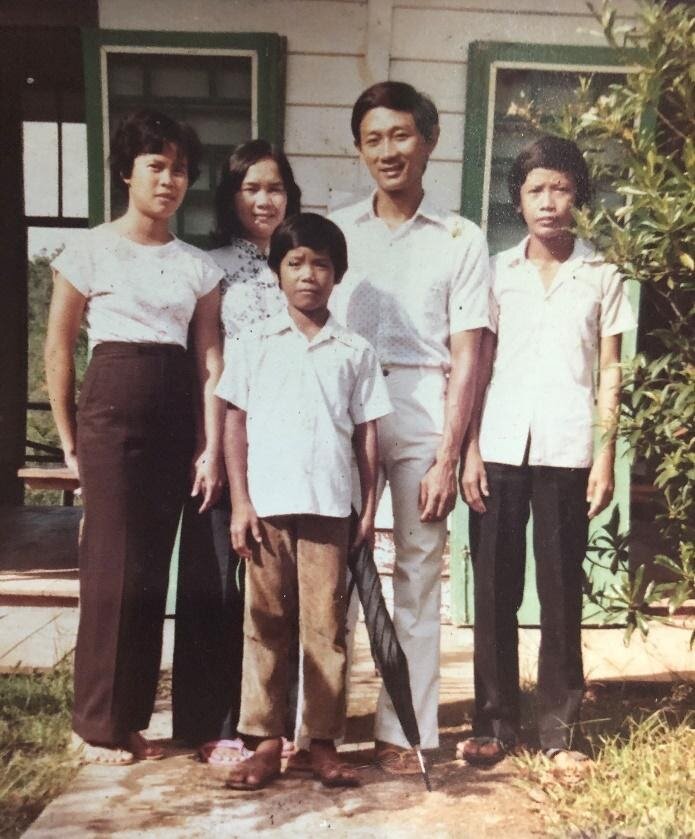 Image provided by the author.

While the present “foster family” encompasses financial and emotional support, this was not the reality then. Foster families served to assist incoming immigrants to assimilate into American culture and help them create new lives here. My dad’s foster family helped him and his siblings get enrolled into high school, find jobs, obtain housing, etc. Unfortunately, as a 16-year-old, his poor English could not carry him through to graduation. He performed terribly in all subjects except math. Instead, his counselors strongly suggested he dropped out – he did.

He and his siblings scrambled for jobs at a factory, but they soon realized this lifestyle was not sufficient and would not help them get the rest of their family to the States. They all worked full-time jobs, took classes at the local community college for several years, and were accepted to transfer to 4-year universities, including Virginia Tech, University of North Carolina at Charlotte, and University of Tennessee. They are all now employed as mechanical, electrical, and civil engineers. 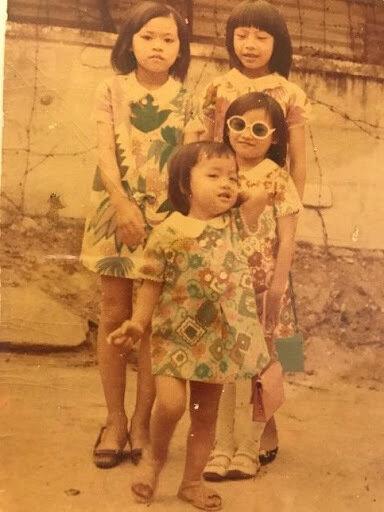 IF I TALK LIKE THIS THEN I MUST BE RIGHT

My mom is the second youngest of ten children, seven girls and three boys. In contrast to my dad, she speaks fondly of her memories from Vietnam. She reminisces about the big house her family-owned, her relationships with her classmates, the education she received, and more. However, her world was turned upside-down when that big house was taken by the soldiers.

When her dad passed away when she was 15, her oldest brother stepped up to take care of the entire family. He was a pilot for South Vietnam and his status enabled him to immigrate to the United States first. He decided it was best to get an American education and stable job before he sponsored the entire family to come over. In the meantime, my grandmother struggled to make ends meet for the rest of the children. Immediately after school, my mom and her sisters would travel to my grandmother’s shop to sell beansprouts and other assorted items.

Like my dad, my mom attempted to flee the country by boat with her best friend, Nhu. Their attempts were too alike because soldiers also captured her. My mom and Nhu were both 18 years old, so their prison sentence would have been long. Instead, Nhu decided to attempt to eat their IDs but could only finish my mom’s. Nhu spent several months in jail, while my mom only served a couple. Decades later, my mom named my youngest sister Nhu.

Upon high school graduation, my mom was accepted into one of the best universities in her area. Due to her family’s wait for her brother to sponsor them, she had to decline this opportunity. It simply did not make sense to pursue a higher education when her family could leave any day. Instead, my grandmother allowed her to choose an artisanal course of her choice – she chose sewing. 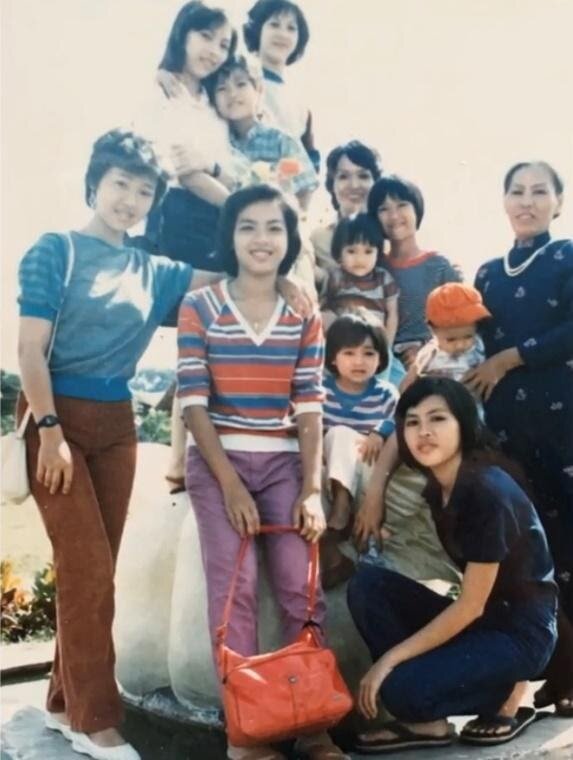 When my mom’s entire family finally made it to the States, my mom had to pick up jobs here and there to support herself. She worked at various fast-food restaurants, including McDonald’s and Burger King, cleaning bathrooms.

My mom and dad had different experiences that led them both to the United States. Their current careers were not simply handed to them and the American Dream was never the goal. They did not come to this country with heavy pockets and full hearts, but left Vietnam penniless and angry.

To revisit Steven Yeun’s quote, Asian American experiences have been completely left out of the narrative they worked so hard to become a part of – specifically, they have been completely cascaded by the model minority myth and Asian fetishization. I’ve come to understand the importance of diversifying the Asian American experiences. We are not a monolithic group and neither are our hardships – we encompass a diverse array of stories that deserve to be heard and understood. Solidarity does not solely come in the form of education, but it’s a pretty good first step.

The Audacity of Andrew Yang