Interview with Riya Goel of AsiansLead

A Conversation With Dhan Illiani Yusof

A Conversation With Malika Burieva

Going to high school in a college town, I found that it was easy to forget that a world outside competitive academia existed. Even most of my social media interactions were heavily influenced by college app advice and memes about stress. But one day, Instagram offered me an incredibly refreshing break by highlighting one of my peers cultivating her craft. It was so exciting to see someone singing, songwriting, and generally doing her own thing!

I started following EASHA during the dawn of her social media presence when we were both in high school, and I’ve followed her ever since. I watched as she took a gap year to work exclusively on music in Nashville and saw her popularity explode this past year on TikTok and Instagram. Recently we sat down to catch up and talk about her music career and her new EP, “Fact of the Fiction.”

Hi, my name is Easha! I’m a 19-year-old singer-songwriter. I’m currently in New Jersey doing college online, like everyone else. I’ve been doing music for 15 years now, but writing music since I was 12. I just recently started releasing my stuff and doing the whole social media thing, and it’s been good

Tell me about your origin story as a musician.

Sure, I got introduced to music through my mom. She’s an Indian classical music teacher. So just by osmosis, I always had to hear it around the house, and she started teaching my sister and me as young kids. Eventually, it’s grown into a full-blown school, and I’m actually a teacher at it now. But it started out at home with some neighborhood kids. I had always been probably the most interested in it. I think everyone else was there because they were forced to be there. And obviously, there was kind of this sense of, “Ah, I like the songs that are on the radio, like, this is kind of too traditional.” But I’ve learned to appreciate that origin and training that has given me. I think I was able to transition into western/American music pretty easily.

You grew up in central New Jersey. Has the region had any influence on your music and writing process?

I definitely think it influences the topics I write about. There’s always this sense of disillusionment—I’ve never really been a suburban person. I like to be in cities. I like to be where things are happening. So, of course, mixed with, like, general teen angst, that’s always a fun source of inspiration.

If I remember correctly, you took a gap year in Nashville before college, right? Based on your social media, I feel pretty confident saying you were extremely productive—tell me about what you were up to!

It was probably the most exciting time of my life! Not only was I solely focused on music, but it was the first time I’d moved out of my house and lived on my own and made friends who weren’t from the same county as me. So a lot at once, very exhilarating. Basically, when I was in Nashville, I would write like two or three songs a day. I had to kind of take it down because I feel like you get really in it, and then you get burnt out. I was performing out a lot because it’s Music City, so any corner you turn, there’s a music venue you can play. So I got a lot of experience playing out and doing a lot of writer’s rounds, which are specific to Nashville. You just play original music with other people in your round. I also just made some really good friends, and in general, I feel like I just learned how to be a functional adult.

How have you been handling COVID-19’s effect on your career?

Honestly, it gives me a sense of peace that it’s not just a personal issue. I think The fact that the whole world was in shambles. The music industry as a whole, it’s not like I was behind and everyone else was just go go go, and I was just watching them. It’s like, the whole industry has shifted. It’s like, everyone is figuring it out at the same time—how do I take advantage of this?

Tell me about your new EP!

My first single that blew up on TikTok and Instagram reels, “Dying is a Beautiful Thing to Do,”—I literally wrote that, recorded that, and put it on Spotify on the same day. I was just so sick of being a lay duck, and everybody wants things on Spotify. That got so many streams, and I was like, “wait, that’s not supposed to happen! Because there’s no production, there’s nothing there…why do people like this?” And then I realized people really like that kind of stripped-down, raw style. Everyone was asking for more songs. So I just recorded three other songs, and it kind of works as a storytelling arc because I put the EP according to “Dying is Beautiful Thing to Do.” I’ve been really grateful for the people who actually take the time to listen and respond to it. It’s given me a lot of motivation to release more music this year.

In terms of genre, where do you place yourself?

I always write acoustically, that’s how I trained myself, and I just find that you’re a lot less lazy when you do that. Because if it sounds good acoustically, it will sound amazing produced. But if it sounds good produced, it won’t necessarily sound good acoustically, so I’ve been really strict about that. I don’t see myself strictly being acoustic in the future because I’ve worked with producers, and there’s a sound that I like that tends to be a little more “pop.” But also, I like soulful songwriting, so is there’s a way I can mix both of them? I feel like the genre’s just dead nowadays. You can mess around and do whatever you want. I’ve had so many people categorize me as different things, but I think at the end of the day, I just try to write good songs.

I feel like this is an unpopular opinion: I don’t like to strictly write from my life. I feel like a lot of people say that they do that, but how exciting could your life possibly be that you’re only relying on that? And I know people who jump from relationship to relationship and just have a boundless source of drama. Obviously, I’m a songwriter, so I’m a sensitive person, but I’m also not the type of person to latch onto anyone.

So I had to come to grips with how to write songs consistently with a source of inspiration that I could control. I’ll use other pieces of art and other songs. Honestly, If you force yourself to write often, you find ideas that you wouldn’t if you were just sitting around waiting for it to happen. I think it’s really romantic to think that everything you write about has happened in your life. I just think it’s really limiting.

I’m also really good at putting myself in situations that I haven’t been in. I’ll write a song about a situation I’ve never been in, and people will be like, “Oh my God, I can relate so much!” and I’m like, “Girl, that’s your song!” The best part about sharing your music is that people find meaning in it that you didn’t originally intend. I’m a big believer that the song isn’t yours once you put it out in the world. It’s whatever the audience wants it to be.

What general advice do you have for someone balancing school and something else?

You know what you want, and you internally know what you have to do and how good you are. Do not rely on external validation! Because it’s not sustainable and not realistic.

EASHA is a 19-year-old New Jersey-based pop artist. She was a finalist at the World Cafe Live Yearly Showcase in Philadelphia and is a regular performer at the Bluebird Cafe. In Nashville, she regularly co-writes and works with Grammy-winning songwriter Liz Rose (who writes songs for Taylor Swift, Little Big Town, etc.).

Her original work has been featured on The Atlantic, Yahoo!, Music Inc. Magazine, etc. She composed two UNICEF tributes (“A Better Day” and “Waves”) for an international charity tour, and the CEO of UNICEF praised the “skill” and “passion exhibited.” Finally, EASHA is the Grand Prize winner of the National Lionsgate Cover Competition.

She has an active following on social media, with 50,000+ Tik Tok followers and 40,000+ Instagram followers, who blew up her debut single live from her bedroom, “Dying Is a Beautiful Thing to Do,” to half a million streams in less than a month. EASHA’s music is like if Norah Jones married John Mayer, surprising the audience with an Indian Classical Music background. Outside of her singing/songwriting, EASHA enjoys triathlons and business. She placed 11th in the world at the 2019 World Championships of Triathlon in Switzerland and attends Stanford University. 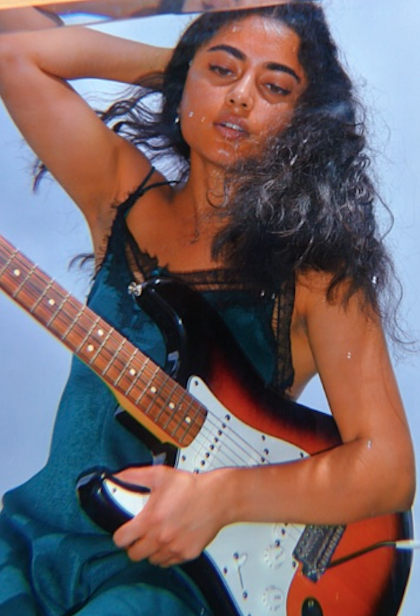