Why I’m a Human Trafficking Activist

The Asian Sex Worker Stereotype and the Military-Industrial Complex

With the proliferation of social media, I am sure everyone and their second and third cousin are aware of the accusations that mental health and every other issue in the modern world is the fault of so much connectivity and everyone constantly being on their phone. But what about the issues of the half-millennium of racialisation that was supposed to have been miraculously gone with the breakdown of the de facto European Empires? The second generation of those who survived colonialism and the vacuums of power that were left behind are still in their 20s and 30s in some cases. It then goes by the same logic that those who remember being in that power dynamic of outright racist superiority being upheld by state powers will also have offspring or even those who are not biologically related to them in similar demographics. The systems that propped them up overtly, however, are gone—institutional racism being held as a form of ‘subtle’ racism, even if there is not much that is subtle about it, is still alive and well as we are all painfully aware of.

A large part of this is the curriculum and the education system that is still mandated by governments, meaning that they inherently display certain political messages, whether this is the denial of the treatment of Native Americans and the indigenous peoples of Canada in the school curriculum or the lack of education on colonialism and its legacies that is still a gaping hole in the pre-18 curriculum of the UK today. One such subtle enforcement of ideas of European hegemony and power is the usage of maps through the proliferation of the Mercator projection without the contextualisation of making it clear that the scales involved meant that Europe is minuscule in relation to Africa and Asia, and thus minimises just how exploitative colonialism was in comparison. Whilst the science itself is obviously not *racial*, the lack of explanation is, as is the fact that this is the map that a lot of us see and think of when trying to conjure up an image of the world map.

Maps are already a large part of the field of postcolonialism, and artists such as Haifa Zangana have made incredible depictions of this. However! This is one field where it is very easy to claim that people are ‘making things racist’ instead of it being racist because ‘it’s just science,’ which is actually very easy for people who are apologists for colonialism to claim that anything offensive is preposterous. This is not everyone, as some people will be genuinely unaware of the implications of what is being discussed, but there will be others who are looking to gaslight, and social media has made this easier as they can now be nameless or faceless. Which a lot of trolls are. Not all, but a lot. That is one way of identifying that they are people who know what they are writing is problematic.

There are other signs, too, such as those who refuse to engage with the nuance of the argument in order to get a reaction or cling to the idea of science being the only thing to matter without context, history, or even sociology. The following will be excerpts from this TikTok: https://vm.tiktok.com/ZSGTJfo7/ as this seems to be the most popular social media platform for young people presently. Everyone included willingly wrote on a non-private public platform.

Interestingly, the first is a self-proclaimed sophomore in what can be gleaned as the North American education system. They spent hours refusing to even contemplate the idea of racism being attached to maps; in this particular thread, every single person who had a problem was a non-POC, and only two had public profiles with their pictures and names up. One notable example had over 43 thousand followers, which is unnerving, to say the least. The following comments are in no particular order as it was three days of comments of some very proud self-proclaimed scientists, and making it all linear would ruin the context given the layout of the platforms comment section. 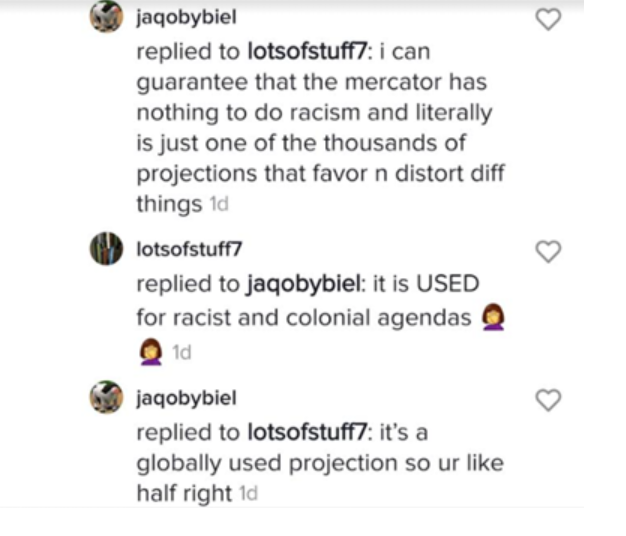 Another example of this being:

(Or somehow studying maths even though again this was not mentioned):

Others will accidentally slip and make it clear that they do not agree with you because of who it comes from; being a POC was mentioned all of a grand total of once. But this is the response it got from dear Sam; no explanation is given of why POC women cannot be taken seriously or how they are wrong. They just are:

This next particular account holder called Josh (surname not included) with the alias kinggeorgeiii3 out and out decided to comment on the third day without any context that none of the messages were misogynistic:

It did not, however, take much time to realise from minimal digging on his public account that he was problematic, to say the least, with these comments with minimal prompting:

When the fact that the legacies of colonialism are now coming to the forefront in Europe and the usage of maps as a by-product of this entered into the conversation, this illuminating argument was offered. Just so everyone knows that I apparently do not teach this, no one told me. Universities of London have been paying me for a non-existent class, it seems:

Another helpfully suggested that anyone who said this about a map ‘went back to school’ with a seemingly anonymous profile except that all of their videos were public such as the one below. So it is just the facade of anonymity that they need?:

The last two, however, were a little bizarre and yet interesting. Both were public profiles. The first is a small business/personal TikTok with this bio:

Who made both the accusation that anyone who called out problematic behaviour had to be American, for reasons only known to them, and this explanation which did not at all recognise any nuance except for the same repetition:

And lastly, after over 72 hours of this, keeping in mind that multiple arguments and explanations had already been supplied by this point, and it was a 3-day old post:

It is important to note that in all of these examples, which sample all 50+ comments, none of these people, not one, would even engage with the notion of racism and how it could not be racist. They just repeated the same basic projection without even addressing the implications of racism – this was not even properly mentioned. In fact, a lot of the comments had no context. They were attacks on intellect, race, gender, and nationality. All reinforcing the original point that not all legacies have yet been dealt with. But nothing to properly engage with. This a tactic that a lot of manipulators use; you will never get through to them. It is best to let them carry on until they give their actual intent away, which they always do, as the above comments show.

That is also the reason you should never debate with cults or hardliners on either side of the political spectrum. They want a rise; they want you to seem overly emotional to make it seem that their logic is flawless. The majority of people were anonymous, and so could be anyone, which is a different type of worry for those of us who fall under the category of ‘monitority’ of any kind. But the people that are not, that clearly have colourist or racist content and responses. Why are they still up? Why do they have tens of thousands of followers? And how in such a globalised society are these ‘shy’ or hidden hardliners still so easy to find in scores on any platform without censure or even limitations? One possibility could be that they incite reactions, which leads to increased amount of usage, which is great for statistics. But if this is the basis of success on these platforms, then where does one draw the line? What is deemed inexcusable, and how do we protect the most vulnerable of users? These are all discourses that need to be properly addressed. In the meantime, it is always good to be able to recognise them instead of feeding them.

What’s wrong with this Mahjong?

Systemic Oppression and Harassment of Women In Central Asia