A Conversation With Dolly Li

Hi, my name is Jacky Lai. I am an actress living in Vancouver BC. Originally from Toronto, but I moved here to pursue an acting career almost 8 years ago.

How did your role in A Sugar & Spice Holiday come to be?

I got the audition and sent in my tape. I did the callback through Zoom with Jennifer Liao (director) and Nancy Bennett (exec producer). It was one of the most extensive callbacks I’ve ever done but so worth it because I got the offer for the role shortly after.

Your character, Suzy Yung, loves to bake, especially with her grandmother. Do you do any baking yourself or have a hobby you enjoy in your free time besides acting?

I do not do any baking which is probably a good thing, I don’t think I’ve baked anything edible. I love being active outdoors when it’s nice out, volleyball, biking, going for walks, and hiking. Other than that I’m usually home a lot. I love watching interviews and ‘best of’ or emotional auditions from competition shows. I don’t know why, but I love watching people emote.

I’ve definitely used food to describe people, but also nature and music. I’m a visual person so I often describe feelings through images, but I draw from everything, beyond desserts.

To follow up, what pastry would you describe yourself as?

I’m gonna say salted caramel ice cream because salted caramel is one of my favourite flavours. Ice cream can be cold at first because I think I’m quite shy and introverted and some people read that wrong. But when it melts in your mouth it’s soothing and delicious which could resemble how much I love and care for people.

Your character is a bit of an Overachiever, wanting to win the baking competition and also get a promotion at her job. What makes you an Overachiever, and how are you and Suzy similar and different?

I’m definitely my biggest critic. I always feel like I can do better and so I put a lot of pressure on myself, and it’s really unnecessary. I tend to want to get things so right or so perfect that it’s unattainable and becomes uninteresting. But I can’t help it, which makes me an Overachiever sometimes. We’re similar in that way. I think she’s a workhorse but also loves what she does, she’s very passionate and so we share those qualities. I’m also really close with my family and I love them to death,  and Suzy definitely has that bond with her family.

I think Suzy is a lot more structured, methodical, and has a plan for everything whereas I’m very present, spontaneous, and I really practice going with the flow. You just can’t really control how things work out and I’ve come to fall in love with that.

A Sugar & Spice Holiday is a special and heartwarming movie for many reasons, but it is most notably the first Lifetime movie featuring an Asian lead actress with an Asian American family at its center. Why is this film such a great representation for Asian women, and how does it go against the model minority myth?

In the media, we’ve been portrayed as nerds, ninjas, or have been sexualized, but Suzy goes against all that and proves that  an Asian woman does not have to fit a stereotype in order to be part of a western narrative.

It has characters like Billy Martin and Pete Yung (Suzy’s father) to expose the myth of being a model minority by telling Suzy that she doesn’t have to live up to these expectations of being the best, smartest, or fastest.

A fun question that I was wondering as I was watching: Did you get to eat any of the food on set? (I actually ordered dumplings after watching because it looked so good).

Hahaha that’s amazing. No, unfortunately we didn’t get to eat as much as we’d like because we were filming during COVID. However, Tony got to eat a lot of stinky tofu the day we filmed the lunch scene!

Any advice for young Asian girls who want to pursue a career in the entertainment industry?

I’m really big on visualization. It’s this trick I learned at a low point in my career and it’s helped me get to where I am. It’s about imitating the feeling that you would have in the moment your dreams are coming true.  You’ve got to conjure up those feelings to match the vibration of that moment. When you’re driving, imagine you’re driving to the set of your dream job. On walks, imagine you just got the call for the role. At the very least, it’ll make you feel nice. And at its best, your dreams will come true! Also, don’t forget to trust the timing of your life 😉

Yes! I’m very excited about these next two projects. Can’t say much right now, but they’re both very very different from Suzy Yung. 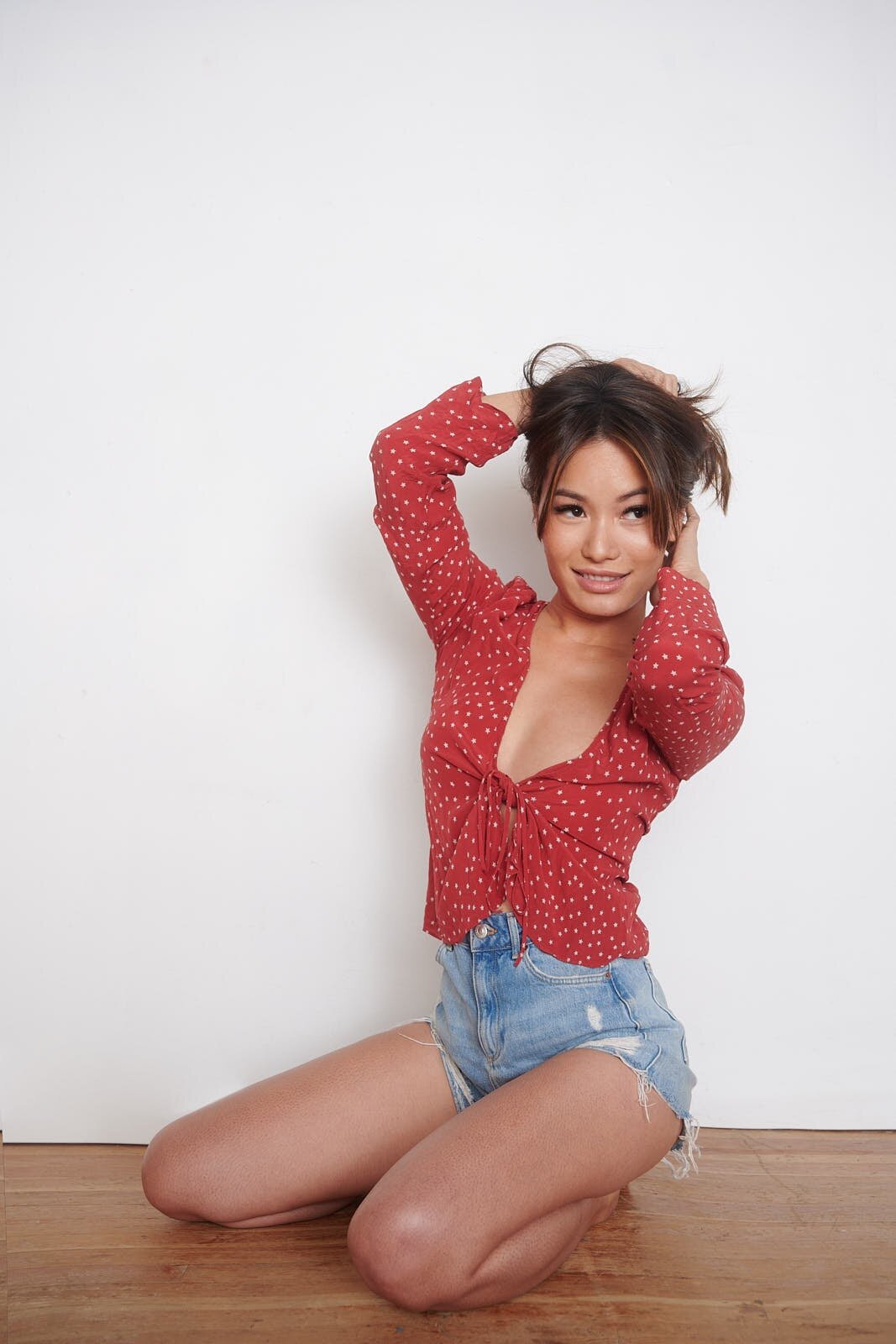 Jacky Lai is a stunning beauty whose contagious smile and warm personality on and off-screen have landed her countless opportunities. Jacky took a leap of faith in 2014 to uproot her life in Toronto and move to Vancouver to pursue her dreams of acting. Jacky always knew her true calling was for the arts and her body of work in Film and Television since is a testament to her belief being more than just a hunch.

Jacky is a Toronto native who had everything she needed on the east coast, supportive friends and family and a stable and growing career in developing small businesses. But she knew that her passion for acting was too great to set aside as a hobby. In the summer of 2014, Jacky made a quick and swift decision to move across the country to Vancouver, leaving everything and everyone she knew behind. Since relocating, Jacky has appeared in The CW’s “The Flash”, and CBS ’“Ransom”and had recurring roles on Freeform’s“Beyond”, “Shadowhunters” and ABC’s “Once Upon a Time”. Jacky has also appeared in the feature film SILENT HILL: REVELATION. Recently Jacky co-starred longside Ian Somerhalder of The CW’s “Vampire Diaries” fame and Adrian Holmes of Bravo’s “19-2” in Netflix’s horror, scifi series “V-Wars” and appeared in indie feature FALL BACK DOWN.

A Conversation with Suri Chan

Previous
The Year in Review with Overachiever Magazine – 2020
Next
The 2020 Issue: Poetry Roundup