We Will Not Forgive &amp; Forget: The Desi-American Me Too Movement

If you grew up in a Indian (or otherwise Desi/brown) household like I did, you know that haldi is worth its weight in gold.

It was the early evening of July 22 when I called Pearl Low, who was on the other side of the continent in British Columbia, Canada. I had just wrapped up a late lunch with a college friend in a tiny town in the panhandle of Florida while she was settled at home in Vancouver, wrapping up her day.

Although I couldn’t see her face, I could hear her smile through the phone, her soft and soothing voice calming my nerves. My parents, who were both born and raised in Canada — my dad from Montreal and my mom from Toronto — always told me that there is an invisible force connecting all Canadians. We always find each other, and when we do, we are immediately put at ease. Although I don’t recall mentioning my Canadian ancestry to Low, the comforting vibes consistently flowed throughout our conversation and never stopped.

Pearl Low is a 25-year-old artist based in Vancouver, BC, her work ranging from storyboarding for animated films and TV, to writing and illustrating comics, to assembling art exhibitions. Some of Low’s previous work includes storyboarding for short animated films such as Hair Love and Canvas, and has her own self-published autobiographical comic called “TENSION.” 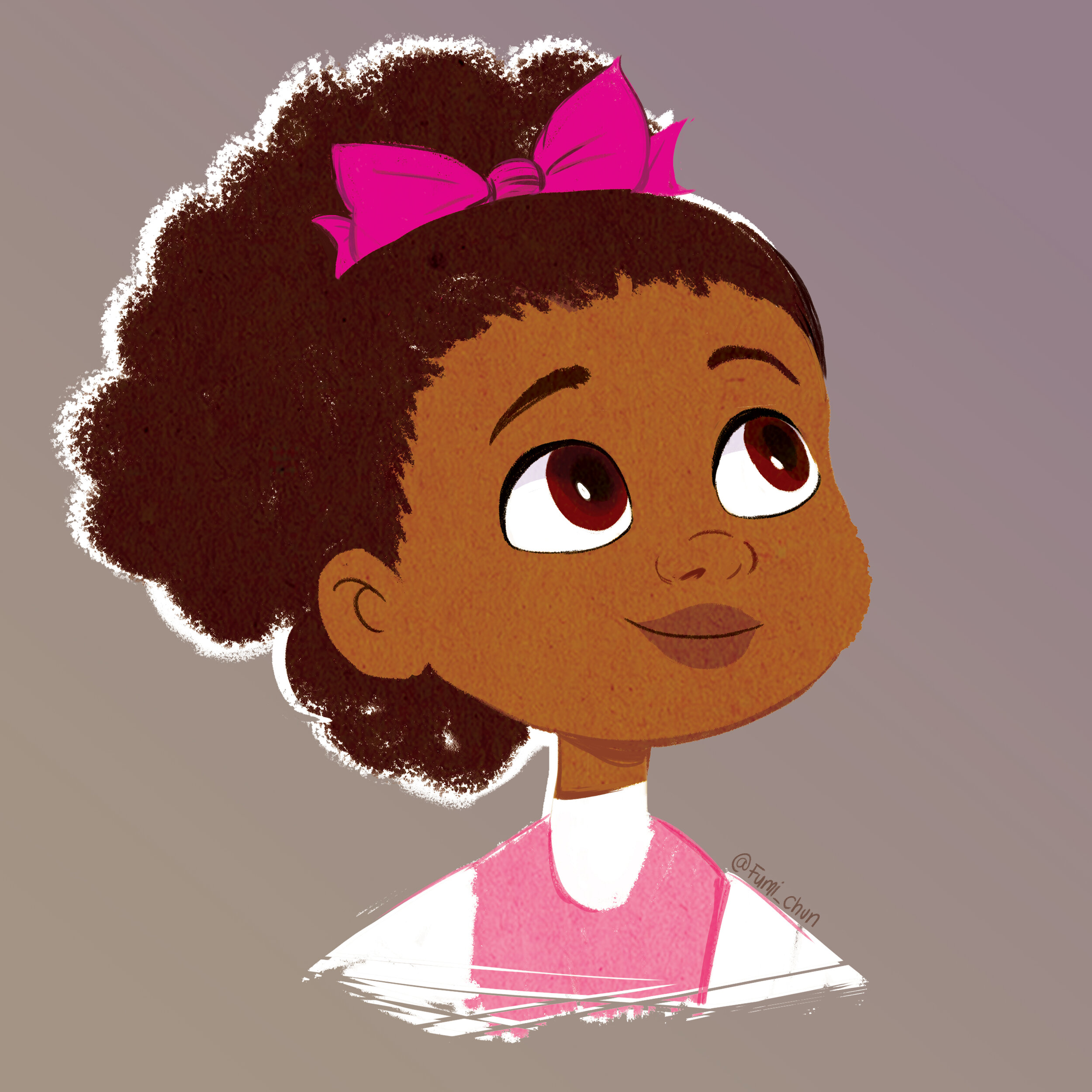 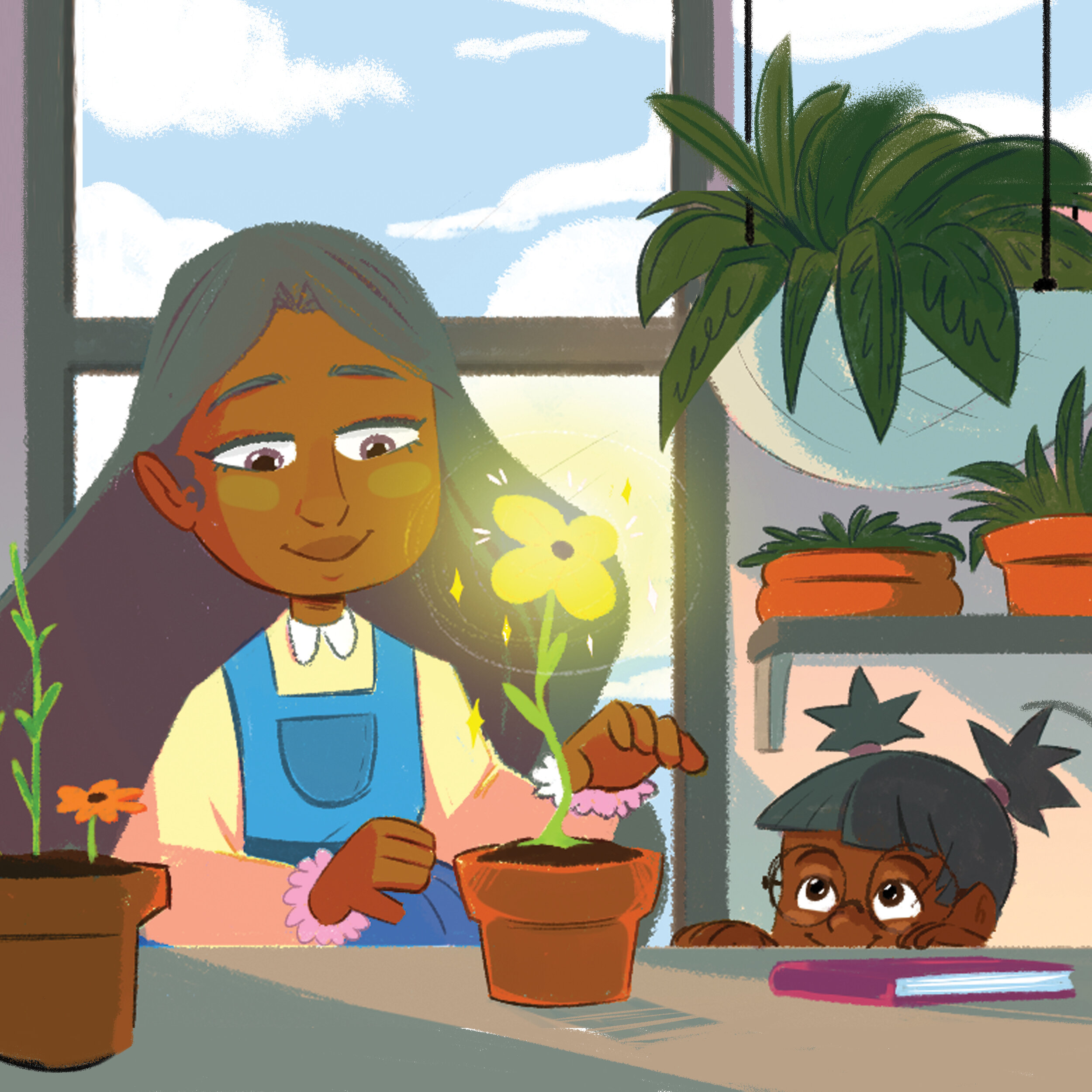 Images in order from left to right: Zuri from Hair Love, Low’s mural for the Vancouver Mural Festival, and her painting, With Flower.

Her earliest introductions to art were through the cartoons that played in front of her when she was little. She recalls memories of watching  Pokemon and Looney Tunes, the colorful plots and characters embedded in her childhood. Her first Studio Ghibli film was Kiki’s Delivery Service, and she vividly remembers the feeling she had after finishing the movie.

“I think at that moment I was like, ‘Well, I also want to create something beautiful like this,’” Low says. “From then on, I…started doodling and practicing drawing on my own time.”

But it wasn’t until Low was in high school that she started considering animation as a viable career path. She found that the best way to get to know more about the industry was to talk directly with the people who work behind-the-scenes.

“[One animation convention called] SIGGRAPH came to Vancouver one year,” Low elaborates. “It was really inspirational for me…They reiterated how awesome the animation industry is, and [that] it’s hard, but it’s really worth it. They told me how many years they’ve been in it. And I was just like, ‘Wow, this is a real thing!’”

As a storyboard artist, Low is encouraged to draw all types of styles and to capture the original concept and design of the creator.

“I didn’t really start thinking about personal style [until around my] second year of college,” Low admits. “It’s hard to because in animation…because when you work on a show, you’re not going to be drawing in your own natural style, you know? It’s a constant battle.”

“I find that my strength and style is actually storytelling,” Pearl continues. “I speak with images. And you can tell the way that I storytell [from] how it looks. I think [that’s] more important to me, developing the style of how I [tell stories].”

Whether they are working on an episode of a cartoon or a feature-length film, the storyboarding team has the job of sketching out each shot of the project to form a cohesive story, visually and narratively. Cooperative collaboration is a huge factor in the process.

“You get to talk with your peers and brainstorm about what certain shots may be a good choice to put in, or why this character is acting a certain way and [their] motivation behind it,” Low says. “The most fulfilling [of the storyboarding process] is sharing my perspective [while] getting to collaborate with others. To create something brand new for other people to enjoy. I think that’s really powerful.”

Low grew up in the predominantly white city of Vancouver as a mixed Black Chinese woman, primarily raised through her single mother’s Cantonese culture.

“There was a weird kind of disconnect between how I felt culturally,” Pearl admits. “[In college,] I took a more deliberate look at how I identify…and what kind of validation I was seeking from both communities. Before college, I really just drew light-skinned characters, Asian characters. I didn’t draw any Black characters. I was so immersed in Cantonese culture, and my friends reflected that, my environment reflected that, and my style of art, of what I chose to create, also reflected that.”

And when referring to how she wrestled with her mixed identity, Low replies, “I think I’m just at a point where I don’t really care anymore. Before it used to really affect me, but now I’m kind of like, ‘Yeah, this is who I am. And this is how I navigate my community that I belong to. If you don’t like me, that sucks, but I will not be interacting with you.’”

“Because there’s a point where it’s hard to interact with somebody who’s committed to misunderstanding you.” She continues. “So I keep on moving and participate in my cultural spaces how I would like to now. And it’s a nice place to be because I don’t feel insecure about my identity as much anymore.”

While Low pours a lot of her artistic energy into animation and other collaborative mediums, she also makes sure to invest her time and talents into personal projects. One of her collections, labeled Food Studies on her website, displays detailed sketches of a variety of Chinese baked and dried goods. Low teamed up with two Chinese organizations, Chinatown Today and Hua Foundation, to guide people through Vancouver’s Chinatown in different ways.

“I work with [these] organizations…to help with the preservation of Chinatown because it’s going through a lot of gentrification right now. We’re trying to bring awareness to Chinese culture, [as well as] the significance of Chinatown,” Low says. “[For] Chinatown Today, they wanted to make a baked goods guide to give to folks who may not be familiar with Chinatown a guide where you could basically go scavenger hunting for Chinese baked goods. [For] Hua Foundation, I did a bunch of illustrations for them to help in [their] efforts to educate people about the culture of herbal shops in Chinatown.”

As for her upcoming projects, Low’s first mural will be featured at the Vancouver Mural Festival, which runs from August 18 to September 7. She is also currently working on some animated features for film and TV, so stay tuned! Low’s flow of creativity isn’t stopping anytime soon.

“[For a while] I didn’t really value my voice and perspective because others didn’t,” Low states. “A lot of times, I was in environments where it wasn’t encouraged for me to speak up or share my opinions and ideas. There’s a lot of anti-blackness that I grew up around too. There [was] no kind of encouragement for me to step into my own. [But once I got to] my early twenties, I definitely was taking intentional actions to develop what I like and, how I like to story tell, all these different [kinds of] self-development. And that was really powerful for me.”

Pearl Low is an Oscar Winning Afro-Asian Story Artist, Comics Artist and Illustrator and muralist, based in Vancouver, BC. Most of her works are rooted in themes of self-love, acceptance and Chinese-Canadian and Caribbean-Canadian experiences. Low primarily works in animation for TV and Feature film working on titles like, “Hair Love (Sony Pictures Animation)” and, “Craig of The Creek (Cartoon Network). Currently she is working at Dreamworks Animation. Low has also self-published an autobiographical comic called, “TENSION” that explores how to love and accept one’s own curly hair, through the lens of an Afro-Asian woman.