In the third grade, I found myself sitting next to a reserved, sweet boy with boxy glasses and a strained grin. He’d accompany me to the monkey bars at recess every day and insisted on keeping me company as I waited in line at the cafeteria despite him already having brought a packed lunch all ready for him to eat. In all honesty, I thought he might have had a crush on me—being the self-centered nine-year-old I was—but little did I know, that little boy would grow up to embody the persona of Dandee Lyon, a drag queen I admire massively, and a dear friend I depend on to this day.

In light of Pride month and Overachiever Magazine’s Pride issue, I figured Josiah Sun, the mastermind behind Dandee Lyon, would be a perfect interview subject to highlight, so I reached out to him about the idea, to which he responded with, “OMG FAITH!!! I WOULD BE LIKE SO TOTALLY HONORED AND AM DOWN!”

So, the next day, we planned to chat over FaceTime, and before I knew it, giggles and shrieks of excitement occupied the first few minutes of the voice memo recording I had rolling. 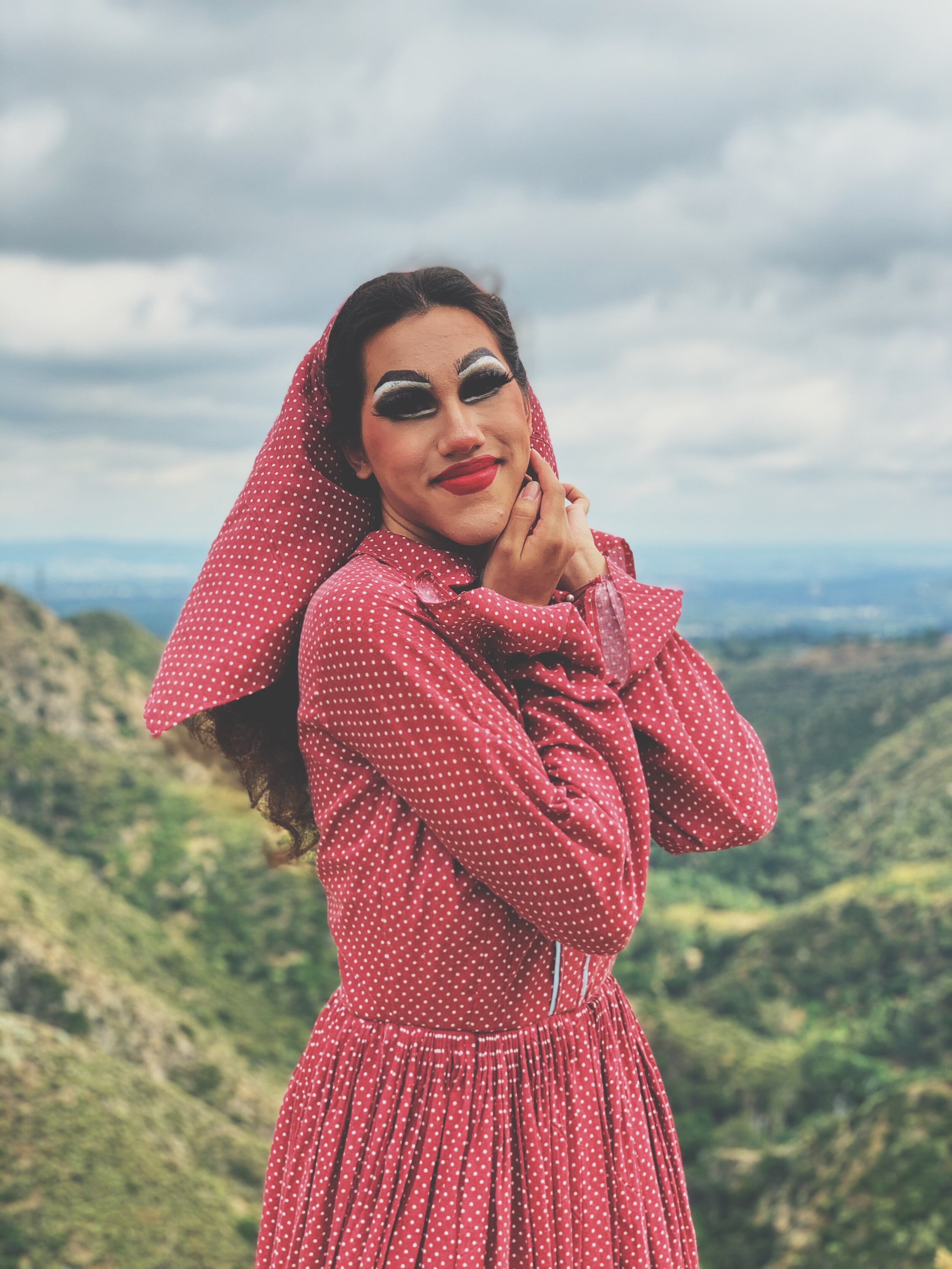 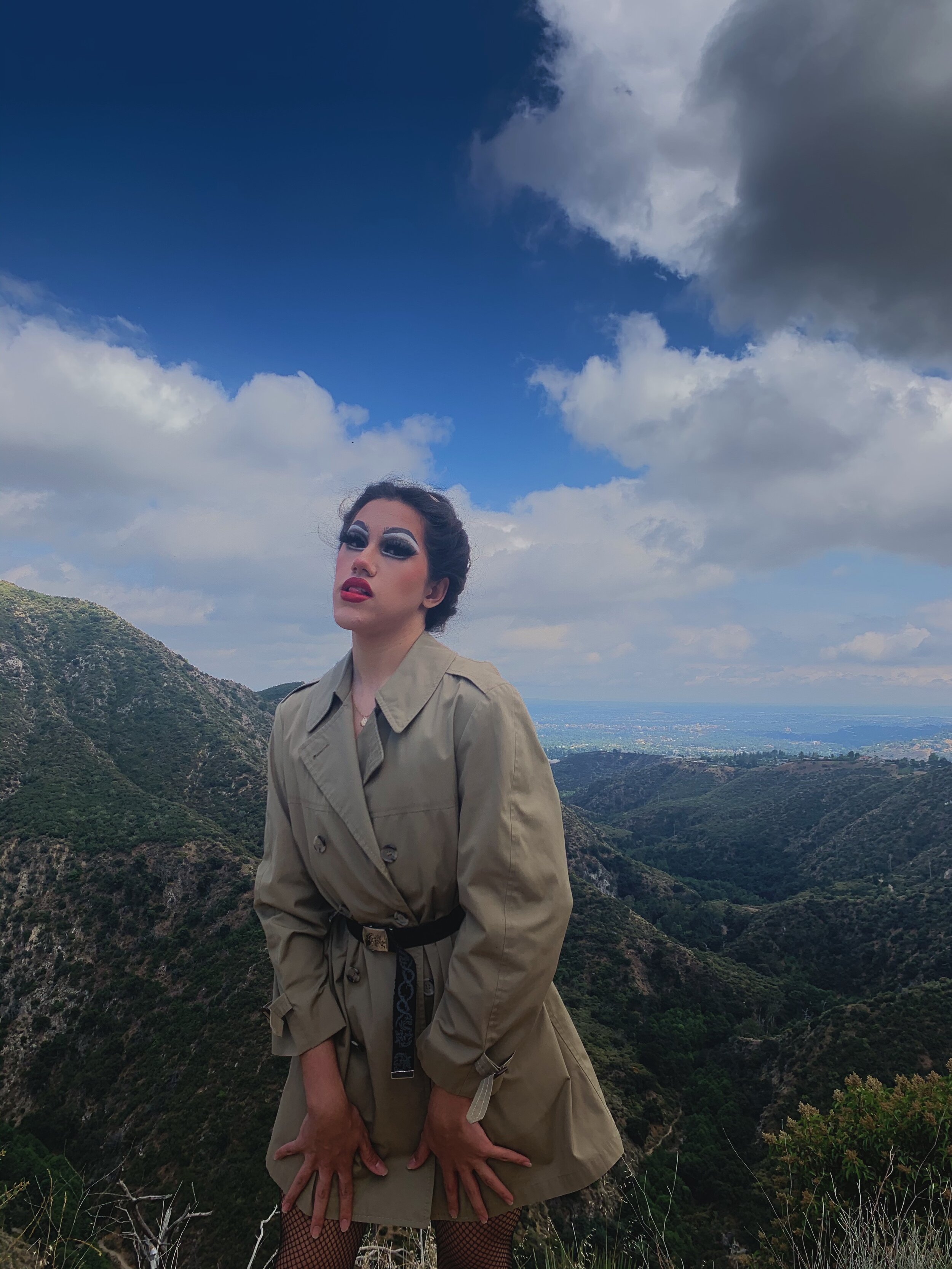 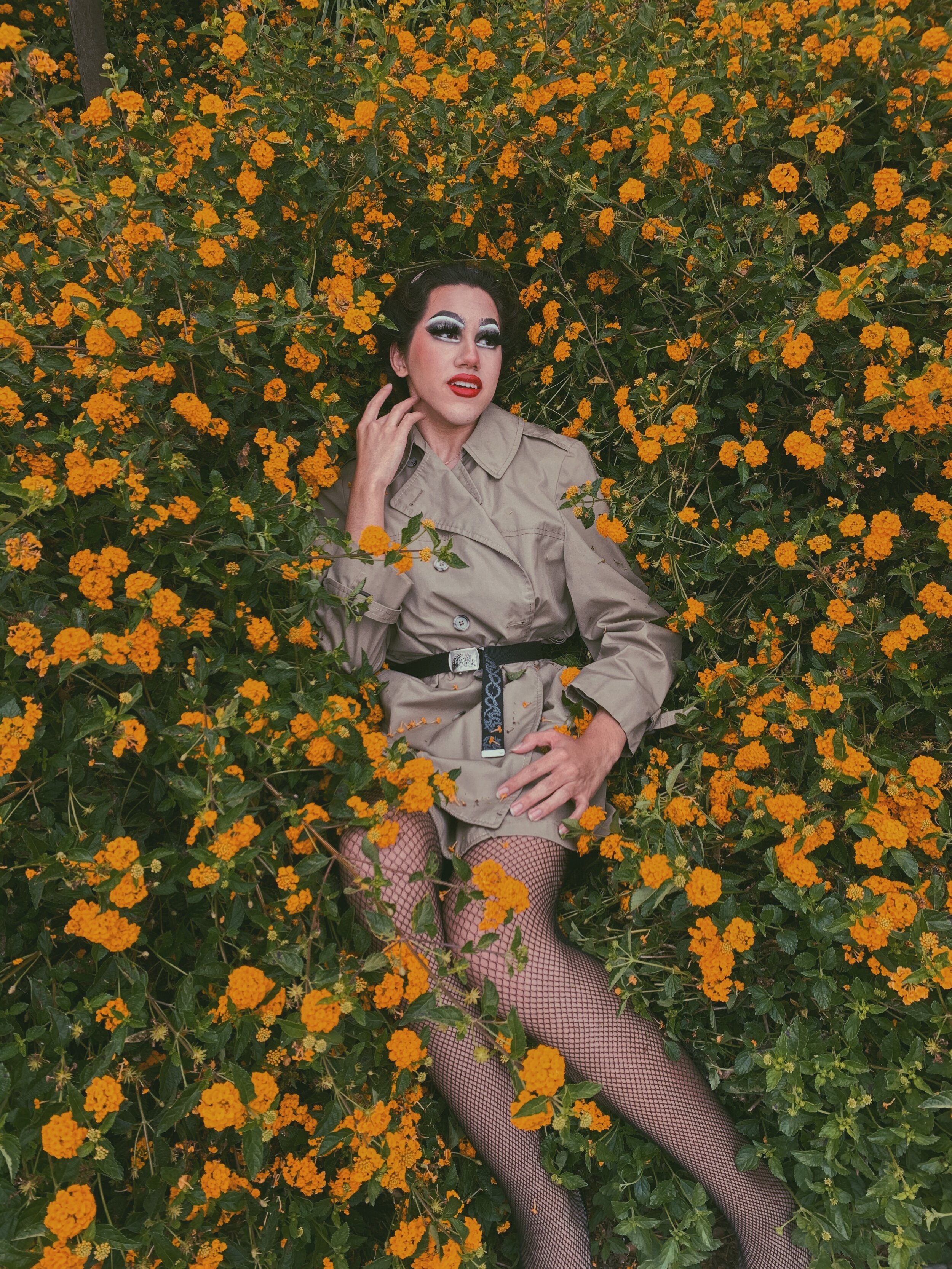 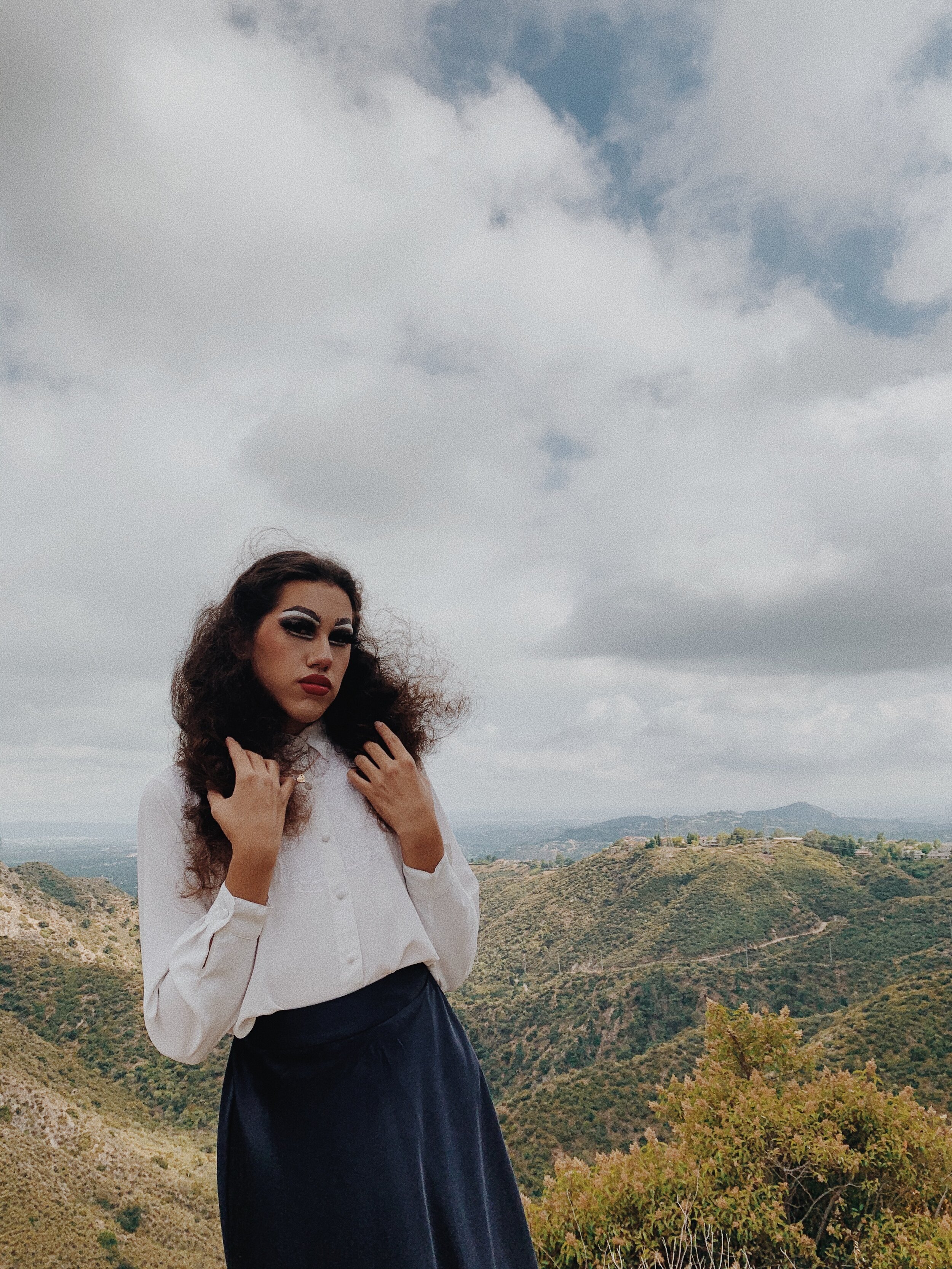 Josiah Sun (he/him/his) was born and currently resides in Pasadena, California, where he studies music with a vocal concentration at Pasadena City College. He is half Chinese, quarter Scottish, and quarter German. He is a part of the LGBTQ+ community and likes to sew and watch “Bob’s Burgers” and “Pose” in his free time when he isn’t personifying the masterpiece that is Dandee Lyon.

“Wow, this is a big one,” Josiah said in response to my question about where the name ‘Dandee Lyon’ had come from. He aimed to create a name that sounded real but was also meaningful. “When I first started doing drag, I was very inspired by the women of the ‘50s, and I was watching American Horror Story: Freak Show at the time. I saw all these beautiful women with huge skirts and tiny little waists and thought, ‘wow, that could be me.’ I wanted it to sound very ‘50s and feminine, and at the time I thought adding two e’s would make a name sound more feminine, but now that I think about it, it’s actually ‘i.e.,’ so, you know, I’m like Billie Holiday but with two e’s!” He erupted with laughter.

“When my sister and I were younger, we would always go outside and help my dad pick out the weeds. We’d always pick at the dandelions and blow on them to make a wish.” Josiah took a big breath, and started to defend dandelions with all his might, “My dad would always call them weeds, but I just thought they were so beautiful. Listen, they blossom and have a bud. They’re flowers!”

“I looked up the symbolism behind dandelions, and apparently they signify hard times and struggles. As a little gay kid battling depression, I was shocked at how the internet could attack me like that!” Josiah then further explained his early knowledge of drag. “In around ninth grade, I saw one of those Truth company ads about the repercussions of smoking. It showcased a group of drag queens talking about how they would lose their beautiful attributes if they were to continue smoking. One of the queens, Trixie Mattel, popped onscreen and startled me. She’s just the textbook definition of a drag queen. A year later, she popped up on my social media again, and I finally looked her up. I found a whole hidden subculture in the gay community. That subculture being drag, of course.”

On June 26 of 2018, Josiah had just come home from a youth group choir event. It was around the time he was trying to come up with a drag name. His older sister had offered to let him borrow some lipstick, which was when he started dipping his toes into makeup. He’d watch drag queen makeup tutorials and experiment with different techniques. “If you put blush at the tip of your nose, it makes it look like a cute little bulb!” he gushed.

“When I came out, I was very young. Obviously, at school like, did I really come out? Everyone was like ‘that’s ancient history, we been knew,” Josiah shared. “My mom always knew, and my family is very supportive of my drag, and I’m very lucky to have such a family.”

Drag as we know it today originated from transgender women who were kicked out of their homes, so they would form communities for all those who were disowned and, in turn, needed some love, according to Josiah. “That being said, to this day, I’ll do drag really late at night because my dad still doesn’t know.”

“I never experienced the whole, Asian-family-super-religious-and-conservative trope, despite me going to a Methodist church, which to be fair, is very pro-LGBTQ+ and progressive overall. I never experienced hardship with religion. I always thought, ‘why can’t I do both [drag and attend church?’ and well, I am doing both!” said Josiah.

Despite Josiah’s friends, family, and church community being very supportive of his identity and drag, the biggest hurdle is still his dad. He isn’t as secretive about his identity as he once was. “Everything’s out on the table… Why keep it to yourself if someone else can learn from it?” Josiah resolved.

Mainstream drag predominantly consists of Latinx, Black and White queens. On “RuPaul’s Drag Race,” the face of mainstream drag, there have been just ten Asian drag queens who have competed out of the 140 contestants. However, according to Jae Thomas’s “Asian Drag Queens Sashay Out of the Shadows,” Asian drag communities such as Bubble T, a monthly queer dance party, the growth of Asian visibility in the drag community has bolstered.

“Isn’t it every young queen’s dream to be on ‘Drag Race’ and make a name for themselves? But I really just want to be able to make a living off of it and connect with other queens and audiences through it,”

For information on how you can support transgender rights and safety, click here.

Interview with The Filipina Feminists