Being Asian in the Time of Coronavirus

More of Me, Please?

The scene opens to a girl standing in the garage of the school’s most popular boy, Paxton Hall-Yoshida, as he suavely removes his T-shirt to reveal his chiseled abs, ready to get down and dirty with the leader of the UN. If you’re thinking that stands for the United Nations, a slightly racist moniker referring to a trio of ethnically diverse friends, you would be sorely mistaken. You see, UN actually stands for unfuckable nerd, the social status of this young Indian-American girl, and her two BFFs at Sherman Oaks High. Anyway, this scene may seem a bit strange, seeing as the boy and girl in this garage are practically strangers. But in fact, it’s a common occurrence in the life of Devi, a 15-year-old Indian-American teen attending Sherman Oaks High, whose life is slightly more dramatic than a telenovela. Here’s some background: Her dad passed away her freshman year at her orchestra concert, soon followed by her legs getting paralyzed, leaving her extremely traumatized and in dire need of a therapist to help sort it all out. The rest of the year follows her crazy adventures from trying to hook up with the boy she likes, Paxton H-Y, to running away from home, to scattering her father’s ashes, to kissing her archenemy.

Accompanying the rise of this Netflix Original, “Never Have I Ever”, comes the meteoric rise of the Tamil-Canadian 18-year-old playing the lead role of Devi, Maitreyi Ramakrishnan. Her success in landing and executing her role is a commendable breakthrough in the industry for Indian actresses in the Western world. The focus of the show is meant to be exploring the life of an Indian-American teenager, however, there were definitely some things that I felt did not represent the life of an average Hindu Indian teen in America, but instead the wishes and figments of imagination that we have. What I’m trying to say here is, as an Indian-American teen myself, I can confirm that never have I ever experienced any of the wild events that occurred in Devi’s sophomore year of high school, at least not in the adrenaline-pumping way that she had experienced them in. The point being that Never Have I Ever doesn’t fully embody what it truly means to be an Indian-American teenager in high school.

Devi’s life seems to be chalked up as being all about drama and her love life, only touching on things such as schoolwork rarely, excluding any instance when she finds herself at odds with her rival, Ben Gross, who holds the ranking of #2 at Sherman Oaks High, second to only Devi. But the truth about this is that a lot of us South Asian teens spend way more time studying for school and extracurriculars — the grades that Devi has don’t come easy and take a ton of hard work —which is something that is barely mentioned in the show. School can take a toll on South Asian kids whose parents have high expectations for their children’s grades, ranks, and college admissions. Long story short, it can be stressful! There isn’t much reference to the difficult levels of academic expectation and hard work that is more often than not experienced by the average Indian-American teen. And of course, there’s the moment when Paxton admits to his sister, the opinion that many people have on Desi students in America. “I’m cool, and she’s famous for like…going to the National Spelling Bee or something.” And I have to admit, that one hit me hard. It was a little painful since I was an alum of Scripps myself, but in all seriousness, I can’t argue with the fact that this is a stereotype about South Asians among most people in America. Yet if we don’t perform at high levels for academics, we’re told this classic line: “Aren’t Indians supposed to be smart or something?” These are some of the same questions about her identity that Devi experiences.

There are so many great expectations for high school, and being Indian, climbing the social ladder can be challenging. Devi must do so much more to prove herself as “cool” than the normal kids who aren’t nerds. It can be frustrating as hell trying to navigate the waters of friends and reputations when all you’re known for is your rank and your academic accomplishments instead of your bomb personality and looks. After a talk with her therapist, Devi thinks she realizes what would make her happy — sleeping with Paxton — which eventually leads to the colorful scene in the intro, but proves time and time again to be the wrong answer. In the process of trying to reinvent her image, she tries everything from posting “Tik Tok” videos to getting drunk quite a few times, to bailing on her lifelong friends for a boy who doesn’t even realize he likes her until his sister calls him out on being a dumbass and tells him to talk to her.

No doubt, there were accurate things, such as Devi being ashamed of her religion. And though I’ve never been ashamed of being Hindu, there have been times when people tried to make me feel ashamed about it. Because of her inner struggles with her religion, she can’t figure out who she really is. “Some old loser was telling me that I’m too Indian, and some other people think I’m not Indian enough! And honestly, all I wanna do is eat a donut, but I’m stuck here!” She spouts her frustration to Paxton during an unlikely encounter at her school where the Hindu Society of Sherman Oaks, California decided to hold the annual festivities for Ganesh Puja. Being brought up in a place where she practiced one culture at home, but grew into other cultures outside, proves to be confusing in figuring out her true identity —who she was, who she is, and who she wanted to be. This is a sentiment shared by many teenage Indian-Americans, and that’s something I can vouch for. It’s hard enough trying to figure out who you are and what you want as a totally normal all-American high schooler, but then you throw cultural separation, a different language from fellow classmates, and parental expectations of being a perfect doctor into the mix and things start to get foggy and more than a little confusing.

But no matter how lost we may be, one thing about Never Have I Ever resonates with the majority of teenage girls inside us: the romantic side of Devi’s life. It almost seems like a dream, watching the most popular boy at school, Paxton, slowly fall for Devi as she opens up and eventually give her the kiss she’s been longing for as “Fire for You” plays quietly in the background, hinting at the heated feelings between the two. And suddenly when things don’t seem like they can get any more complicated in her love life, her long time rival Ben Gross tries to kiss her at his 16th birthday party. Reeling, Devi now has two boys in her life, and thinks the choice is an obvious one until Ben proves just how much he cares about her. Finally, she returns the gesture and kisses him as if there’s no tomorrow as the scene fades out to a close of the first season.

Despite the nuances between Devi’s sophomore year and reality, it is safe to say that though in different ways, life can be confusing, complicated, and dramatic for everyone. It may not be as adrenaline-pumping, romantic, or academically effortless, but it definitely has its best moments and its worst moments, just as Devi does. 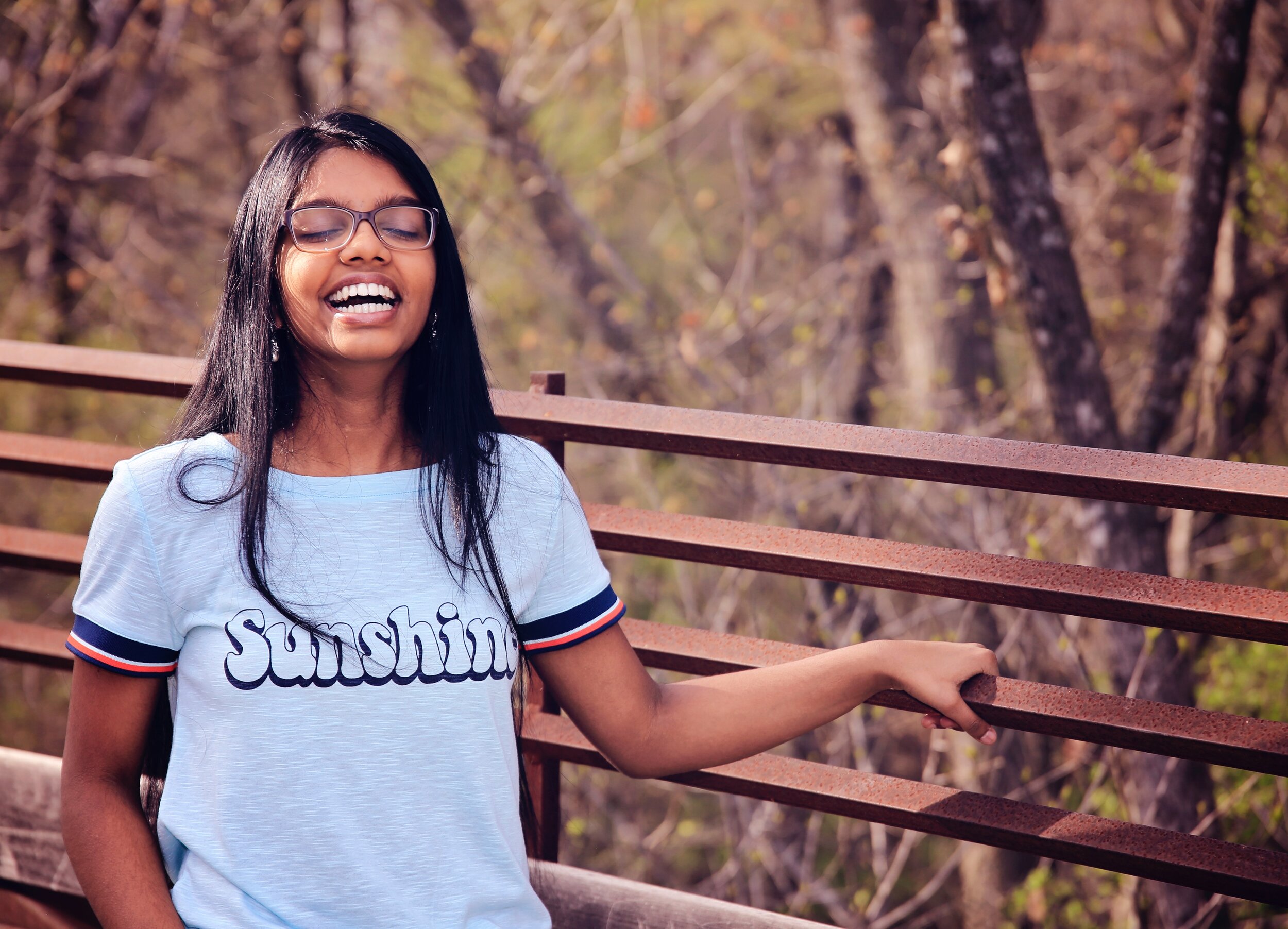 Maitri Kovuru is a high schooler in Texas, USA. She was a top-50 finalist at the Scripps National Spelling Bee in 2019 and her passion for the English language continues over from the bee to her love for writing. She first began writing in the 7th grade for a school assignment and has been interested ever since. Though she thoroughly enjoys chemistry she is not sure what she will study at university yet, but she will continue to pursue creative writing on the side. In her spare time, she enjoys making portraits of people and riding her unicycle around the neighborhood. Maitri has definitely had her fair share of unique encounters that come along with being Indian-American and strongly believes in the fight against racial discrimination.