"Planet has only until 2030 to stem catastrophic climate change"

"We have 12 years to act on climate change before the world as we know it is lost."

"It is absolutely time to panic about climate change"

Jackie Fernandez is a two-time Emmy award winner, writer, and lover of matcha lattes. In this interview, she talks living her truth, racism in the workplace, and staying connected to her roots.

What do you consider to be your greatest accomplishment?

We don’t really take time, as Asian-American women, to acknowledge our own accomplishments. Women in general, do that. On paper, you’d think my greatest accomplishments were when I won my Emmy’s. But, when I won my second Emmy, I wasn’t happy at all. I was clinically depressed and suffering from intense anxiety. I felt trapped in a job I didn’t like and was in a really bad mental state. My biggest accomplishment was having the strength and courage to pivot careers. It takes a lot of guts to walk away from a successful job and venture into a new industry that you’re passionate about.

My biggest accomplishment was having the strength and courage to pivot careers.

Have you ever personally experienced discrimination due to your race?

I was born in Queens, raised in LA, and grew up surrounded by faces that looked like mine. Then, I became a News Anchor in places like Tampa, Florida, Cleveland, Ohio, and Greensboro, North Carolina. The culture shock was humbling and it was hard. Sometimes, it can be difficult to verbalize when we’re being discriminated against because it’s subtle. When I was working in the South and Midwest I was constantly told that my direct tone surprised them and to temper it. There was a resistance when I would speak up and an expectation of subservience that I found very disturbing. I couldn’t exactly pinpoint it at the time but you’ll always know when you’re being discriminated against because you feel it in the pit of your stomach.

A more obvious example of when I experienced discrimination was in Greensboro. My co-anchor and I were doing a story on sleep deprivation, and I was checking it out before the show. A producer had written copy for my co-anchor saying, “Jackie, it’s so hard to get a good night’s sleep, but when you do, is this what you look like?” and had created a picture of a sleeping baby panda. It was 10 minutes before the show. Rage filled my body. I did not know what to do. I deleted the graphic, and told the producer we needed to talk. I swallowed my rage because I still had to do a three-hour show and the show must go on. This anger burned in me for several months. I internalized it. Everyone told me that I was overreacting, that it was a cute photo. No one understood the significance and constantly explaining its offense was exhausting. There’s always an excuse.

How do you stay in touch with your culture

?I’m an American-born child of Filipino-Chinese immigrants. I stay in touch with my culture through my parents. I had a large extended family at home, and every weekend there were as many as 30 people in the house, playing mahjong, cooking, and laughing. My entire family is my link to my culture.

What is your favorite thing about your culture?

The friendliness, the liveliness, the laughter. Humor is such an integral and wonderful part of Filipino culture.

“Humor is such an integral and wonderful part of Filipino culture.”

What is the most exciting event you have covered?

When I was working in Cleveland, the NBA championships and the RNC were back-to-back! That was such a fun time, the city was so alive. It was the intersection of sports, politics, and entertainment, in such a short span.

Did you always want to be a journalist?

I always wanted to be a storyteller, and writer. I wanted to be in entertainment. Obviously, my parents thought I was crazy!

Do you think that Asian women are cut out of creative fields?

There’s so many Asian-American women who have worked their asses off and are slaying in top positions in creative fields. Those women are making strides and helping all the other younger Asian American women who are trying to break in themselves. There may have been a time when we were cut out of creative fields because there was an archaic belief that we did not belong but that belief system has been shattered. Now, this doesn’t mean everything’s perfect. There’s still a lot of work to be done, notions to be challenged, and stories to be told; andAsian-American women will continue pushing boundaries by creating the content themselves.

What are your thoughts on the model minority myth?

What do you do to relax?

I meditate! I’m trying my hardest to get back into a meditation and fitness routine.

What is the best thing about your job?

I have freedom. As an entrepreneur, everything I do is an extension of myself and my passion.

What is the worst thing about your job?

When you’re an entrepreneur, the only person who cares about your work is you. Everything is on you. When it’s like that, it’s very hard to take time to breathe and unwind. It’s constant work.

“When you’re an entrepreneur, the only person who cares about your work is you.”

How do you deal with negativity?

I try to stay balanced. Whether people are hyping me up or tearing me down, I don’t let it enter my soul. Also, I find journaling and checking in with my support system helps me to stay on an even keel.

What advice would you give to Asian women looking to break into creative fields?

I’d tell them to believe in themselves, know that they are worthy, know that they belong in that space, and that they can do it. Also, to connect with people are trying to achieve the same goal as them and help each other on their journey. When one of us wins, we all do.

An extra hot matcha latte with oat milk and no foam.

What do you think the biggest problem facing Asian women is?

Having a self-limiting belief 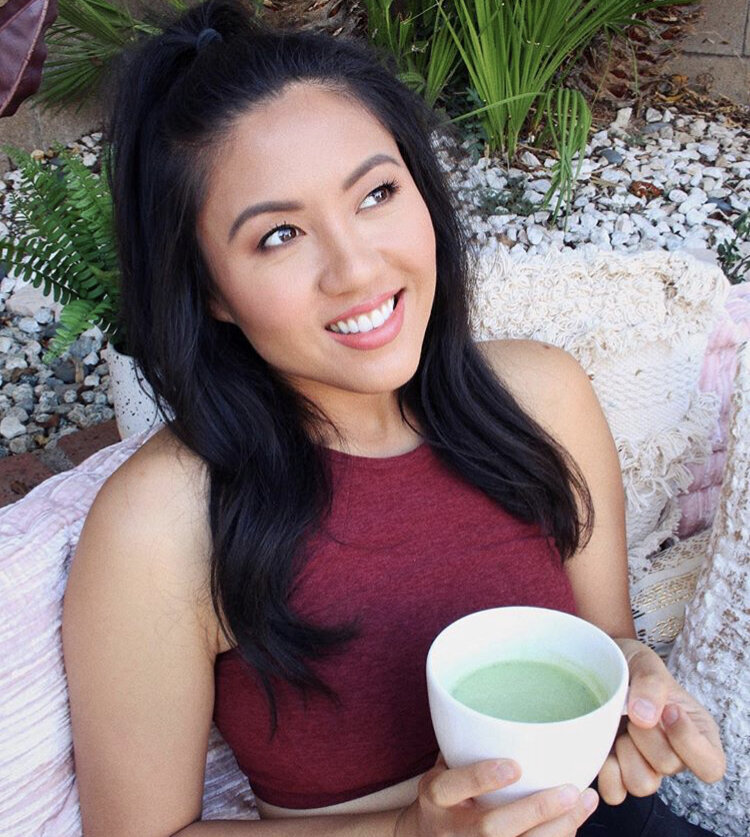 Looking forward: Jackie is working on a series about women in the workplace, coming to IGTV in January.